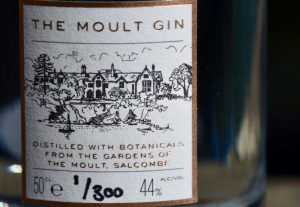 We’re delighted to announce that The Moult in Salcombe has created and launched its very own Moult Gin. With a batch of 300 limited edition bottles ready and waiting, every set of guests visiting the house will be gifted a bottle (until they’re all gone, of course). While we’re incredibly excited about this new tipple created by the team at the coastal house, what’s even more interesting is the inspiration behind the delicious concoction…

Well before the Earl of Devon acquired The Moult and its four acres of grounds in the mid-nineteenth century, its rocky coves served as convenient smuggling posts.

During the 1700s, high customs duties on imports like tea, tobacco and spirits, led to a huge increase in smuggling along the south coast. The ‘free-trade’ was highly profitable and as such, remote fishing ports like Salcombe joined in despite the risks.

Smuggling became so prevalent in the area, that in 1819 Abraham Hawkins complained that fishermen at Salcombe were ‘too fond of following contraband communications with the opposite shores of Brittany.’

With customs officers in nearly every port, poorer people living in small villages along the coast were enlisted to help unload vessels and bring the illegal cargo ashore.

By the end of the Napoleonic wars in 1815, men and ships joined the fight against smuggling and as a result, those with capital who had previously funded the trade began to withdraw. However, there is evidence to suggest that smuggling continued throughout the nineteenth century on a smaller scale.

Up until the mid-1840s, spirits accounted for most of the contraband seized by the coastguard and for the next ten years, tobacco became the staple smuggling item.

Now, whilst we still enjoy a tipple, these days we prefer to make our own. Best of all it’s being done using ingredients from The Moult’s very own garden! 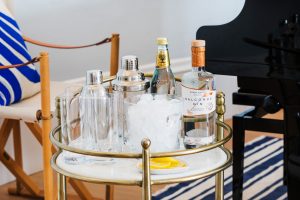 Built in 1764 and known locally as Salcombe’s first ever holiday home, The Moult sits in the lee of a steep cliff between North and South Sands. This Victorian gothic style house with iconic pink paintwork, is surrounded by four acres of pretty landscaped grounds with panoramic coastal views. Here, it is rumoured that Alfred, Lord Tennyson wrote his last poem, Crossing the Bar, in the garden overlooking the bay.

Along with a traditional walled vegetable garden, The Moult is also home to stunning Italian terraced gardens with climbing fruit plants that weave up the old stone walls, and exotic plants like palms, aloes and agaves from all over the world.

The orangery also houses an impressive collection of grapefruit, lemon and orange trees, some of which were used to create the new citrus-infused Moult gin. But this isn’t the first time citrus plants have been grown on the estate. In fact, fruit is actually a much bigger part of the area’s heritage.

Previously known only for its small fishing port and unfortunate reputation as a haunt for smugglers, by 1835, Salcombe had become famous for its fruit schooners.

As the fruit trade developed following the end of the French Revolution, the town’s shipyard set to work building boats to carry the lucrative cargo. The schooners were small, fine-lined vessels built for speed, so they could race home with the perishable goods to be sold at markets in London, Bristol, Liverpool and Hull.

Salcombe dominated the fruit trade during the first half of the nineteenth century, producing around 300 sailing vessels, despite its limited facilities. Pineapples were shipped in from the Bahamas, dried fruit came from the Mediterranean and sailors battled treacherous conditions to transport oranges from the Azores in the winter months.

As citrus fruits became more sought after, residents began to grow them on the south coast. That way, they didn’t have to wait for a shipment or travel out of the area to get hold of them. In The Moult’s Victorian glasshouse, now used to grow grapes, you’ll find the remains of the old brass heating pipes once used to keep the tropical plants warm. 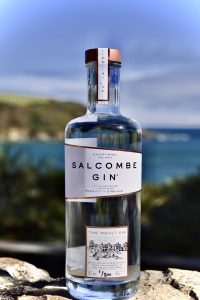 Inspired by the exotic cargoes which once filled Salcombe harbour, the owners decided to revive the growth of citrus plants at The Moult. It’s here that the new citrus-infused gin stems from.

Initially, a prototype was developed at award-winning Salcombe Distillery Co’s local Gin School, where you can create your own bottle of gin from a variety of ingredients to take home with you. Having enjoyed the class so much, the owners decided to team up with the leading local brand to develop his own limited-edition batch of Salcombe gin for guests staying at The Moult.

After much trial and error, and plenty of tasting sessions, the recipe has been finalised with the help of master distiller Jason. The new Moult gin has been distilled with botanicals including oranges, fig leaves, rose petals, raspberries and lavender from the house’s own Italian gardens.

The bottle’s label even features an illustration of the house sketched by a friend of the owner in The Moult’s visitors’ book!

Try Moult Gin for yourself

Want to get your hands on a bottle of Moult Gin? The delicious concoction is only available to guests at The Moult. That means you’ll have to book your own luxury getaway to put it to the test.

Enjoy a tipple while you bathe in the luxurious heated outdoor pool and take in the spectacular sea views. What could be better? With only 300 bottles created – and several going missing already (how could that have happened?) – we wouldn’t wait around.